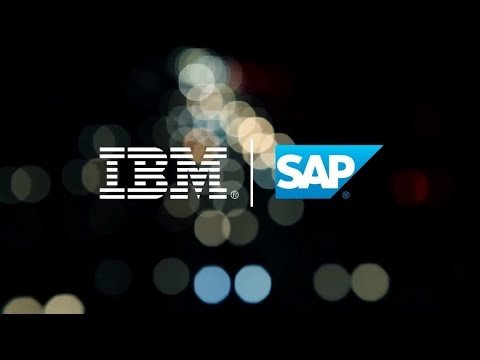 The Evolution of the SAP IBM Partnership

SAP’s first Global Alliance Partnership was established with IBM in 1989 but the relationship existed previously, extending right back to the creation of SAP in 1972 by five former employees of IBM. Almost five decades later, and ten months after the latest evolution of the partnership IgniteSAP is looking this week at how the relationship is projected to extend into the future.

The common goal of this partnership during the last five years has been for SAP and IBM to combine their efforts toward facilitating the digital transformation of their customers, with more recent announcements in 2019 and 2020 introducing specific co-innovating projects.

In the summer of 2020, in response to the pandemic and associated disruptions resulting from national lockdowns these corporations released joint publicity statements detailing the next stage in their partnership, redefining it as the SAP IBM Evolution Partnership.

By this stage the partnership had resulted in the modernisation of many enterprise systems and business processes for their shared customers, in particular IBM had migrated 400 companies from SAP ECC to S/4HANA.

Adaire Fox-Martin (who was until January this year a member of the SAP executive board) described the intentions behind this new iteration of the partnership:

“Organisations’ short- and long-term futures are being defined by their ability to proactively respond to today’s challenging, unprecedented market conditions. Companies gain competitive advantage by unlocking data up and down their value chain, uncovering new revenue opportunities and creating exceptional experiences for their customers and employees, while also demanding faster time to value. SAP’s partnership with IBM brings together the power of world-leading intelligent applications and technology expertise to realise value more quickly, which in turn fuels the transformations that will support businesses today and into the future. This partnership will serve our customers in the marketplace and on their balance sheets.”

In essence greater emphasis was placed on intelligent industry solutions enabling end-to-end processes, the acceleration of implementations and on the development of innovations that would help this to take place.

Elsewhere the SAP vice president for IBM global partner management Alfred Menger described one of the first of these innovations: an SAP and IBM development project on SAP’s Industry Cloud platform. The project was to modernise processes for the industrial machinery and components industry which caters for other industries such as those creating consumer products, or automotive and technology products.

“We’ve worked with IBM for many years and now it’s all about preconfigured and integrated solutions, which customers want not just as project, but as a solution by design. We can work with IBM and connect these different applications. For example, IBM is taking S/4HANA environments and connecting that to SAP Sales Cloud configure-price-quote environments. They’re actually building the sales intelligence application on top of SAP Conversational AI so that sales reps could run queries about the opportunity status, and that runs through the whole process… IBM brings in industry expertise, and we’re working with their Center of Excellence and key technology people to figure how to run SAP solutions with IBM capabilities.”

Commenting on this extension of the IBM SAP partnership, Bob Parker of industry analysts IDC said: “… from SAP’s perspective, the partnership with IBM is a very good one as IBM brings a lot of industry expertise, especially from their GBS [global business services] unit. The mutual benefit of it is that it gives IBM access to SAP’s large installed base, especially in industries like manufacturing, but also IBM brings in some industries that SAP historically hasn’t been as strong like in financial services.”

A cornerstone of the partnership between SAP and IBM is the IBM SAP International Competence Center which was opened in 1993 and is located next to SAP Global HQ in Walldorf.

According to IBM the ISICC: “fosters cross-industry enterprise collaboration with teams of experts for co-creation of digital solutions based on SAP growth initiatives. Together, they explore, plan and build the customer’s digital future with the right mix of infrastructure, hybrid and multi-cloud solutions and services to meet specific SAP application requirements. Within the ISICC is the IBM Rapid Move Studio, a Center of Excellence where we provide clients with a hybrid adoption approach to SAP S/4HANA using automation, enhanced user experience, software tools and accelerators.”

To further the new aims and objectives of the ongoing collaboration with SAP IBM has also established the IBM Accelerated Move Center, a “next-generation migration factory” designed to automate and accelerate the journey of their customers to a fully functioning intelligent enterprise.

The offering targets companies that run SAP ERP applications, and includes software for reducing project and preparation pipelines, maintenance team workloads and required system downtime. An IBM “HANAtisation” Console helps to identify custom objects that need to be addressed in the move to S/4HANA, along with a dual maintenance dashboard and among other software tools designed to ease migration.

“We’re looking into things like how they can accelerate the process such as putting up a system that’s not completely empty. IBM also has hundreds of thousands of pre-configurations for S/4HANA. So how do we bundle that together ? …[We] start on a very highly configured system: that’s the acceleration.”

IBM also runs a program designed to asses the pre-existing systems of potential customers as part of an effort to increase the number of annual go-lives into the hundreds, with a particular emphasis on mid-market customers. Keith Costello, IBM’s global SAP leader said:

“Those [mid-market] customers need to move too, but it’s a large effort and you can’t do that by ones and twos. You need a repeatable way to do it, because those clients have cost pressures, they have time frame pressures, they want to understand what the scope of the solution is, and they need to build a business case and go to their boards for approval.”

Another complex area of collaboration between SAP and IBM is in the transition of businesses from on-premise systems to the cloud.

In October last year IBM announced that as a result of a recent IBM IBV study in which 64% of executives were shown to be planning to shift to a more cloud-based business model over the next two years, they had identified a need for deploying hybrid-cloud systems for ERP workloads and a much greater level of security for those completely cloud-based systems.

IBM and SAP are working together to simplify and accelerate SAP workloads on IBM cloud through optimisation and also allow clients to deploy and run tailored SAP software configurations at whatever location they choose: whether it is on-premise, or cloud, or as a hybrid.

IBM’s general manager for public cloud Harish Grama pointed out: “Clients across industries are looking to shift to cloud and this is the core focus of our collaboration with SAP – giving our clients the ability to embrace the benefits of cloud without compromising on security and controls. This is all done through an open hybrid-cloud architecture so our clients have a choice in how they approach their digital transformation, guided by the industry expertise needed to be successful in their journey.”

To date IBM and SAP have collaborated globally with hundreds of clients on over 5,500 projects in order to modernise their systems using a hybrid-cloud deployment.

The SAP and IBM Evolution Partnership has also put in place plans to help companies leverage feedback data from customers and employees on the quality of their experiences interacting with those companies. They will provide technology and services from the SAP Customer Experience and Experience Management solutions by SAP to clients which allow analysis and improvement of these in order to increase customer loyalty and engagement in a variety of industries. IBM intends to integrate SAP Experience Management solutions (initially derived from Qualtrics) in product delivery as part of a wider program to increase personalised and optimised customer engagement.

What we see in the Evolution Partnership is a comprehensive strategic alliance which is moving with the changes in the business environment. The change economic circumstances has unsurprisingly brought on a flurry of plans and projects for all companies which were previously languishing on the drawing board. A more urgent need for digitisation, faster migration and cloud adoption has opened up vast opportunities for corporations like SAP and IBM and so they are acting accordingly.

A partially symbiotic relationship between these two beasts can only be of mutual benefit given the overlap in their software services, and will certainly be of use in generating new customers through cross-selling. Their attraction to their clientele is that they are safe and stable while simultaneously conspicuous as co-innovators, and as such can offer a stable platform for businesses for the future. As a strategic partnership this platform can be seen as more stable than more independent competitors and consequently SAP and IBM are keen to demonstrate they driving digital transformation for businesses through cooperation.